Ferguson and the System of White Supremacy: What we can learn from the 1967 Riot in Grand Rapids

While attending a symbolic action in Grand Rapids, an action in support of what is happening in the aftermath of the police shooting of a young Black man in Ferguson, MO, I heard someone say, “we need to be vigilant and make sure this kind of thing doesn’t happen here.” 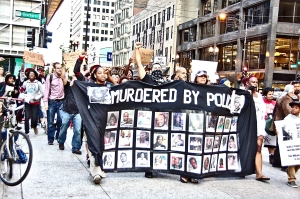 The fact is, that police killing or brutalizing people of color does happen here and has a long history of happening here. Whether it was the brutalization of Indigenous people by White colonizers, the decades of Black people being the target of police brutality, or the harassment of other communities of color, what is happening in Ferguson is a microcosm of what has taken place in Grand Rapids and all across the country since the beginning of European colonization of this hemisphere.

It is not only important that we come to terms with this history, but do the work of learning from it. One way to learn from history is to examine specific incidents, which not only tells us a great deal about what has happened, but how oppressed communities responded to the violence and how systems of power and oppression responded. It is particularly important for those of us who benefit from systems of oppression, those of us with privilege, understand these dynamics if we are going to play any serious role in challenging and dismantling these systems of oppression, which in this case is the system of White Supremacy.

The race riot, or as some refer to it as, the racial uprising that took place in Grand Rapids, in July of 1967, is a useful example to learn from.

Like all across the country, the Black community in Grand Rapids suffered from high levels of poverty, unemployment, limited educational opportunities, poor housing and little political power. On July 24th, Grand Rapids police pulled over a car with several Black youth, and in front of several witnesses, used “excessive” force against the Black youth.

This was the spark that ignited an entire community’s rage over decades of institutional racism and exploitation. Some in the Black community smashed windows of White owned businesses, while others set fire to abandoned or rundown buildings owned by absentee landlords. An estimated 320 arrests were made during the three days that rioting took place, with most of the arrests involving members of the Black community.

There is nothing exceptional about how the Black community responded to police brutality in Grand Rapids during those summer days in 1967. They rose up and they resisted. Much can be learned from how oppressed communities respond to systemic oppression, lessons that are well documented in Charles Cobb’s recent book, This Nonviolent Stuff’ll Get You Killed: How Guns Made the Civil Rights Movement Possible. However, it is equally important for our purpose to learn from how the systems of oppression and those in power responded.

The responses highlighted are those that promote and perpetuate the system of White Supremacy. White Supremacy is an historically based, institutionally perpetuated system of exploitation and oppression of continents, nations and peoples of color by white peoples and the European continent, for the purpose of maintaining and defending a system of wealth, power and privilege. This definition comes from Latina activist Elizabeth Martinez and it is the framework used here to assess the various White Supremacist responses to the 1967 uprising in Grand Rapids

A woman from Ionia said, “We heard they were coming here on Tuesday. We all had our guns ready if we had to.” Another White woman in Lowell was quoted as saying, “I think it is terrible. They are destroying their own property – hurting their own cause.” A resident of Saranac stated, “It is a terrible thing to say, too, but authorities should open fire on them, do something drastic to wake them up.” A man from Holland agreed with serious force being used against those rioting. He stated, “The troops should have orders to stop them anyway necessary.”

All of these responses are important if we are to understand how entrenched the system of White Supremacy really is. However, it is the last point we need to pay extra attention to today.

We can not afford to see the police brutality in Ferguson as bad behavior by a few bad cops. We have to see it for what it is, a manifestation of White Supremacy. More importantly, we can not be seduced by the notion that we just need more programs for Black youth or more social services in order to prevent more people of color from being murdered by the police. We need to dismantle White Supremacy.

Granted, dismantling White Supremacy is not a single act or an easy problem to overcome, but anything we do that does not have that goal in mind will only result in this kind of violence being played out over and over again. Again, this is especially important for those of us with multipole privileges, especially White Privilege. We can not engage in activity that just makes us feel better and we cannot do things that will “help” people of color. We must struggle against and ultimately dismantle the system of White Supremacy. If we don’t, then we are complicit in the systematic oppression of communities of color.

This entry was posted in Civil Rights/Freedom Movement and tagged 1967 race riot in Grand Rapids, lessons from ferguson, system of white supremacy. Bookmark the permalink.