(This is Part II of a two part series by local labor historian Michael Johnston. Click here for Part I)

The postmaster, the banker’s son and other leading citizens of Centralia, Washington, wanted to make an example of this hero turned red and they got him after a short gun battle. Someone slammed a rifle butt into his mouth shattering his teeth. That night they dragged him from his jail cell, castrated and lynched him.

It was the year 1919. Wesley Everest was back from Europe after fighting to “make the world safe for democracy.”

One-eyed, half Indian, half White labor organizer Frank Little didn’t fare very well either. In the dark early morning hours of August 1, 1917, copper owners and their henchmen dragged Little from his room next to Miner’s Union Hall, took him to the outskirts of Butte, Montana and hung him from a railroad trestle. Another red was dead and the nation’s press loved it. No one was ever arrested for the murder.

Joe Hill was also a union member. However, this poet, songwriter and sometime farm worker, copper miner and construction worker was unjustly tried and executed by firing squad by the State of Utah on November 19, 1915.

Reds, but not communists, these men were leaders of America’s most famous labor union, the Industrial Workers of the World, the IWW, the legendary Wobblies. Writers of labor’s anthem “Solidarity Forever,” they were the inventor of the sit-down strike and flying picket lines. They practiced non-violence and welcomed all to the ranks of organized labor, women, black and non English speaking immigrants from Eastern Europe. They courted the skilled trades and furiously organized the masses of unskilled: copper and silver miners, in Arizona, Colorado, Utah, Nevada and Montana, iron miners in Minnesota, lumber jacks in Oregon, Washington and Idaho; textile workers in Massachusetts and New Jersey, harvest hands in North Dakota, California and South Dakota; timber workers in Louisiana; auto workers in Detroit; rubber workers in Akron; electrical workers in Schenectady, longshoremen in Philadelphia and garbage wagon drivers in Grand Rapids. They never numbered more than 100,000 members at their peak in 1923, yet they terrified big business and the government. members were hounded, branded, beaten, deported, jailed and lynched. 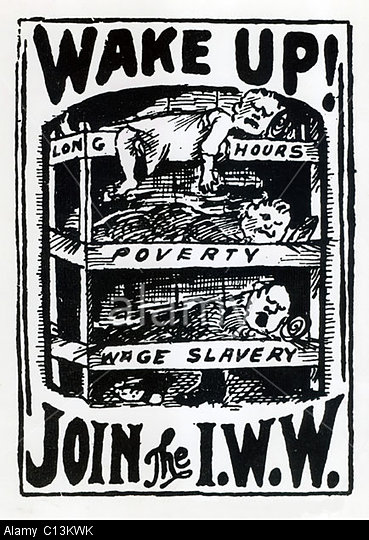 They made their official appearance in Grand Rapids in 1910. Local No. 202 was chartered as a furniture workers local but quickly became a mixed local of all kinds of workers sharing the Wobbly philosophy of “one big union” of all workers. In typical IWW fashion, local Wobblies took to the streets to get their message out to the “working class” of Grand Rapids. They handed out flyers, held street meetings, and rented halls to point out the evils of the “American Separation of Labor,” and the foolishness of craft unionism. Their ideas of “revolutionary industrial unionism” would later be picked up by the CIO in the thirties and become the basis for powerful and the powerful and progressive UAW.

Wobbly style freedom of speech didn’t sit too well with some in the “Valley City,” as Grand Rapids was nicknamed then.

“The mayor has refused the IWW permission to speak on the streets, as he has Mormons, who carried the matter to the city council, which upheld the mayor.”

In April 1911, Big Bill Haywood, General Secretary Treasurer of the IWW arrived in Grand Rapids during the “great furniture strike.” As a member of the Socialist Party, he was here to talk to the small, but influential Socialist Party chapter. Local 202 offered moral support but had too few members to have any effect on the strike.

However, in a series of articles in the Industrial Worker, the union’s second national newspaper, the union reported on the strike and predicted its failure. Writing under the pen name, OL Wakeup, this unknown writer knew the labor situation in Grand Rapids intimately.

“The workers seem to be contented with their lot. The dominant nationality is Hollander and the majority of these workers come from the farming communities and small settlements in Holland, where the standard of living is low. The population is God-fearing and law abiding, the ministers dominate and conservatism prevails. The children of these workers are duly impressed by their parents and the dominic that the church is the whole thing…….while the churchgoing conservative Holland element dominates the present. The majority of the members of Local 202 and the most revolutionaries are Hollanders, who come from the large industrial centers of Holland, where radical and revlutionary ideas and non church goers are more prevalent. 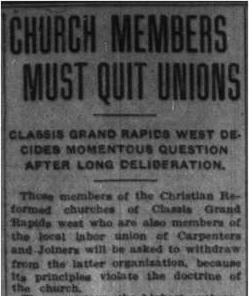 Large families and home buying are other means for keeping the workers conservative and timid…….

The workers here, judging by the visible evidence, have certainly faithfully followed the divine command to increase and multiply so that there may be lots of unemployed slaves competing for jobs on the market…..

In my 24 years of experience all over the US I have observed that those cities where large numbers of workers owned their homes were always low wage, long workday, open shop towns.

In this city where the industrial committee of the Chamber of Commerce sends out literature for the purpose of inducing or seducing other manufactures to locate there, the chief inducement is that Grand Rapids has a large supply of contented, home owning labor and that the disadvantages in regard to shipping facilities are more than offset by the cheapness of labor. The home owning proposition is put up in a very attractive package, but if the worker will stop to think it over and will not permit his sentiment to becloud his reason, he will perceive that it is good for the real estate shark.

Then when you get caught on the home buying stunt, all your spare time and what money you can get hold of goes to improving the place……that is the home buying psychology and the real estate sharks know it. You get so you can’t or won’t think about anything but owning the home and hanging on to a job at any price. 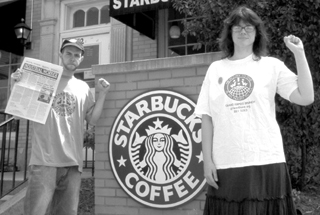 Frank Bohn, a famous IWW orator set up his soapbox at Veterans Memorial Park during the strike. In 1912, the IWW tried to get a raise and a reduction in hours for the wagon garbage drivers in the city. Because they were part of the city’s health department, the Wobblies again found themselves facing the wrath of Mayor Ellis.

Edward Ruthven, isted as living at 55 Lyon Street, served as the spokesperson in this area for several years. The IWW would not again appear in Grand Rapids until the late seventies when the Eastown Community Association print shop received the union shop label. It closed in the eighties. Then in the late 1990s, the IWW appeared again, gaining national attention for organizing at local Starbucks beginning in 2007.