Working Class Families were simply forced to move: Consequences of highway Construction in Grand Rapids from the late 1950s through early 1960s

Like many things we assume are the norm, highways are a relatively new phenomenon in human history. Highway construction through Grand Rapids was first proposed after WWII as part of the Eisenhower administration’s interstate highway construction program, know as the National System of Interstate and Defense Highways.

US 131 construction began first, which meant that an estimated 1,000 homes on the west side of Grand Rapids would be demolished to make room for the new highway. Most of the families displaced were working class families of varying Euro-American heritage – Polish, German, Lithuanian and Italian. You can see from the picture here the early stages of construction, where houses once stood. St. Adalbert’s Catholic Church is pictured in the far right corner of the picture. (photo is from the Grand Rapids Public Library, William Drueke Collection)

State Highway Commission at the time, John Mackie said, “The new system will enable Grand Rapids to realize its full economic and industrial potential.” Mackie’s comment is instructive, since it makes clear that the intention of the highway through Grand Rapids was not about realizing human potential, but that of industry and capital. As with all modern capitalist projects, there are some who benefit tremendously, while others are left out or even punished in the process.

The “who benefits” notion is demonstrated in the photo here, with State Highway Commissioner Mackie, pictured with members of the Grand Rapids Chamber of Commerce and Miss Michigan (on the far left), for the ribbon cutting ceremony for the completion of US 131 through Grand Rapids on December 22, 1961. The Capitalists were present, but not working class families. 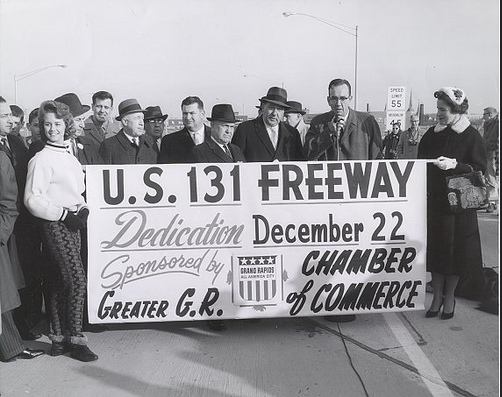 This entry was posted in Anti-Capitalism/Labor and tagged benefits the economy, destruction of homes for US 131 construction, west side homes destroyed, working class families displaced in Grand Rapids. Bookmark the permalink.