In previous postings we have looked at the work of Grand Rapids cartoonist Jim Jirous in the 1980s, with his work on Central America and anti-nuclear themed cartoons. 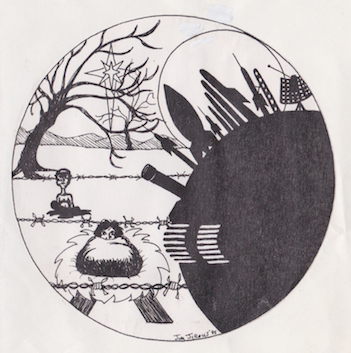 Jirous created political cartoons for a housing collective in Grand Rapids that produced its own newsletter called Koine Orama, which is Common Vision in Greek. Koine Orama was published by activists from a housing collective modeled after the Catholic Worker movement, so the content sometimes had overtly religious messages. In this first cartoon, Jirous uses the Christian Nativity scene, but instead of wise men and animals, you see military hardware and poverty reflected in the image.

In a second cartoon, you see Santa Claus and his reindeer flying in the sky. Satellites in both the US and the former Soviet Union are picking up some sort of signal and both think that it is a military strike. This paranoia was very palpable in the 1980s, particularly with nuclear weapons like the Cruise Missile, which had its own guidance system and flew along the terrain, making it hard to pick up via satellite detection. The engines for the Cruise Missile were manufactured in Walled Lake, Michigan at the time.

A third political cartoon from Jirous with a holiday theme was this cartoon that depicted the hyper-militarized toys that were heavily marketed towards kids. Jirous uses sarcasm to communicate his distain for the war toys that contributed to the normalization of violence and militarism in US culture.

These cartoons provide a rich visual history into some of the activism in Grand Rapids in the 1980s.