The linked article on the Heartside Park is re-published by the FUNdamentalist newspaper, which was published from 1991 – 1998 in Grand Rapids. 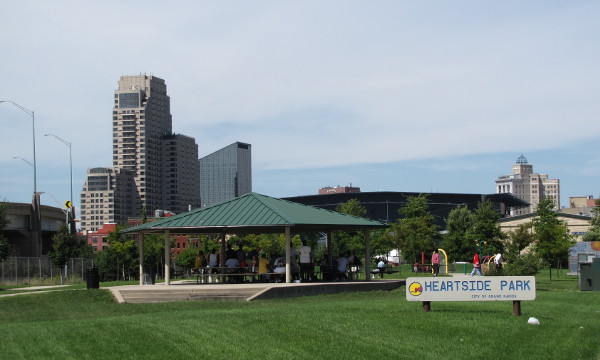 The Heartside Park almost didn’t happen. As the linked article suggests, there were lots of political and economic efforts that threatened the park’s viability.

Efforts began in the mid-1990s to create a park in the Heartside neighborhood, one that would serve many of the people who relied on social services from a variety of agencies. The park gained traction, but there were numerous obstacles to overcome.

First, other entities, particularly the Catholic Schools, were looking at the creation of a park that would primarily benefit their sports programs. Initially, they looked at a possible Heartside Park space, later they looked south of Wealthy and eventually to Knapp St. SE.

Then there was the issue of the City Commission approving an off ramp that wold significantly reduce the park size. (see photo where ramp is to the left of the park leading up to the Van Andel Arena)

Not to be deterred, the Heartside Park efforts were finally realized in 1997, after years of a battle between the city and downtown businesses who resisted the creation of a space that would cater to the “homeless population.”

People raised money, held concerts and finally won a battle despite the city’s master plan calling for a park in the Heartside area. Numerous agencies rallied around what was being called, The People’s Park.

However, the park is under constant scrutiny, especially as development projects have sprung up around the park, specifically the Downtown Market, which has never been in favor of the park that is a haven to people subjected to poverty.