W. E. B. Du Bois spoke in Grand Rapids two times in the early part of the 20th Century

The great African American intellectual and author W. E. B. Du Bois came to Grand Rapids on two separate occasions, first in 1917 and later in 1928.

On his first visit in 1917, he spoke to the Sunday Evening Club at an event organized by Park Congregational Church. Before his talk there was an announcement in the Grand Rapids Herald, with the headline shown here on the right.

Du Bois, speaking just months after the US got involved in World War I, made the point that there was a large number of African Americans drafted into that war, despite the fact that their rights were not granted to them by the country they were now fighting on behalf of.

The Grand Rapids Press did not report on the lecture by Du Bois, rather, they published an editorial piece on May 4 of 1917, entitled, Sharing the White Man’s Burden. The Press editorial followed a very patronizing and white supremacist pattern of thinking. The Press editorial suggests that the negro shouldn’t blame everything on the white race and that they should move forward on the “path of progress” and not mourn what the white government has done to them. The Press editorial makes a mockery of the history of slavery and institutionalized racism directed at African Americans and instead, implores them to not dwell on the past, but to look to the future. Here is that editorial in its entirety below. 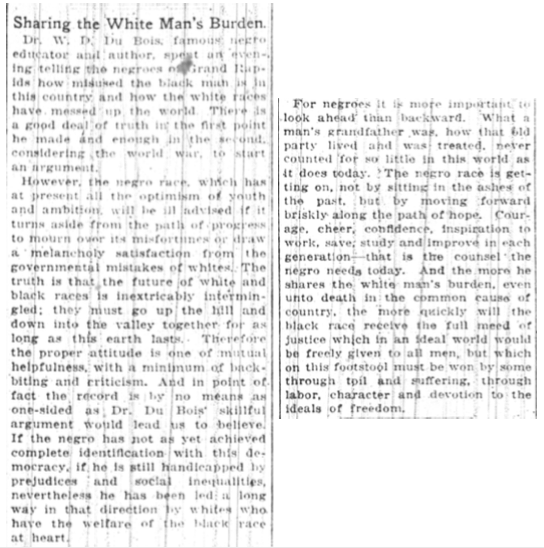 Du Bois was invited back to Grand Rapids in 1928 by the Interracial Council. The author and head of the NAACP, spoke at Trinity United Methodist Church. This time the Grand Rapids Herald reported on the lecture, with the headline, Negroes Part in US Civilization Cited by Leader of Race.

Unlike the visits by Booker T. Washington to Grand Rapids some 25 years earlier, there is no evidence that white people, particularly white businessmen, were drawn to the words of Du Bois. The contrast between Washington and Du Bois could not be stronger and although Du Bois was in favor of blacks lifting themselves up through education, he differed from Washington on the question of systemic racism and how it made it nearly impossible for blacks to overcome injustice and find equality while the system benefited whites.

Unfortunately, there was no recording or transcription of the talk Du Bois gave in 1928, so it is hard to say completely what he talked about. But here in what the Grand Rapids Herald reported below.