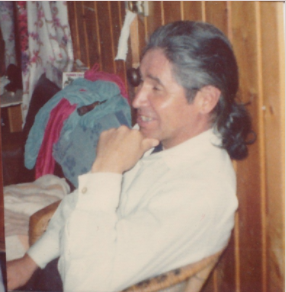 This posting is based on an interview from the independent newspaper, The Fundamentalist in the summer of 1993. The entire interview is linked in the posting, but a summary is what we are providing.

One of the co-editors of the Fundamentalist newspaper conducted an interview with the Odawa War & Peace Chief, known as Black Eagle. To those of us who knew him, we called him Pine.

Pine participated in part of the 1988 Walk for Disarmament in Michigan, which began at the south part of the Mackinac Bridge.

According to one news report, Black Eagle would refuse to drive with a Michigan drivers license, because he wanted to continually challenge the ongoing treaty violations. Around the same time that the interview with Black Eagle was conducted, he was in the process of finishing a book that, “amassed evidence he thinks proves that the 19th Century treaties between Ottawas and Chippewas (he prefers the more traditional names Odawa and Ojibway) and the United States are false or forgeries. He also argues that the 1924 act of Congress making Indians U.S. citizens and the 1943 Indian Reorganization Act, which recognized various tribes, are unconstitutional.”

One quote from the interview is very revealing. It states:

Pine puts the problem of tribal councils forcefully: “The earth is being destroyed and polluted, and tribal councils are taking part in signing leases to multinationals through the US bureaucracy. Tribal councils have nothing to support the Anishinaabe way of life, but when election time comes around, they are very quick to put on the mask of tradition.”

This entry was posted in Indigenous Resistance, Indy Media and tagged interview with the Fundamentalist, Michigan treaties, Odawa War & Peace Chief, The Sacred Fire of the Odawas. Bookmark the permalink.