Dutch members of the Eastern Avenue Christian Reformed Church were considered pious people. The church members did more than just pray in 1888, when the Street Railway Company of Grand Rapids wanted to put a rail line along Eastern Avenue. 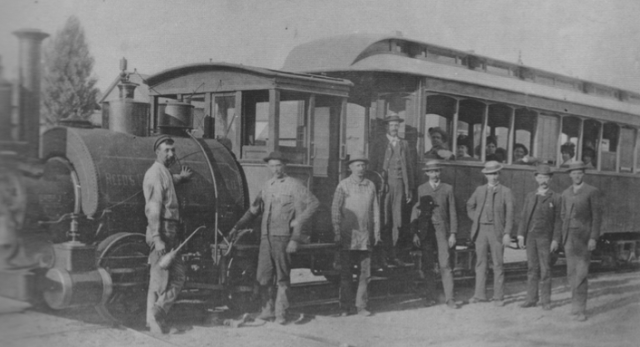 Fearing that the rail line would threaten the church’s ability to worship in peace, church members first petitioned the courts to stop the company from putting rail lines along Eastern Avenue.

This tactic did not work. Shortly after the court’s decision, the company began laying rail lines on Eastern Avenue near the church. Church members rang the bell to summon supporters to go out and greet the railway workers. Some church members tried to remove the rail lines, while others threw rocks at workers in an attempt to deter them from putting in the rail lines.

One source said that some of the church members were able to rip up rail lines and throw “pieces in the frog pond.” (Legendary Locals of Grand Rapids, 2012)

The police arrived by then to stop the church members from doing further damage. However, the very next day, the church bells rang again and this time about 1,000 people came to put a stop to the efforts of the Street Railway Company of Grand Rapids.

Again church members threw rocks and torn up rail lines faster than the workers could put them in. The GRPD showed up again to try to put a stop to the assault on the rail workers, even putting people in the paddy wagons. However, other church members were helping them to escape and avoid arrest.

A total of 3 blocks of tracks were ripped up that day, “some portions of it stand upon the ends of the ties, resembling a huge picket fence.” (from a retrospective piece that ran in the Grand Rapids Press in 1967)

A temporary injunction prevented the company from putting down any new rail lines that summer of 1888. The Kent County Circuit Court paid down a permanent injunction on December 23, 1889, giving the Eastern CRC members a victory.