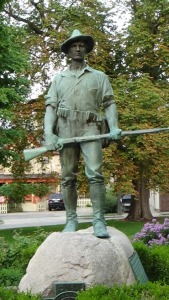 In Charlotteville, the decision was made to remove a statue of Confederate General Robert E. Lee and now there are communities looking to take similar actions to remove statues that reflect White Supremacists leaders or values.

If Grand Rapids was to take inventory of statues that support white supremacy, what might we find?

Like most cities, there is no shortage of statues in Grand Rapids, most of which are to honor certain individuals or specific events in history. There have been several new statues added in recent years, based on a project that has been spearheaded by a member of the Grand Rapids Power Structure, Peter Secchia.

However, maybe a good place to start would be to look at the statue that resides in the little pocket park located at the intersection of Cherry, State and Madison streets. The statue is of a generic US soldier who fought in what is generally identified as the Spanish American Wars.

These wars began in 1898, and were for the purpose of US imperialist expansion, where the US militarily occupied Puerto Rico, Cuba and the Philippines. Here is what the plaque that accompanies the statue states: 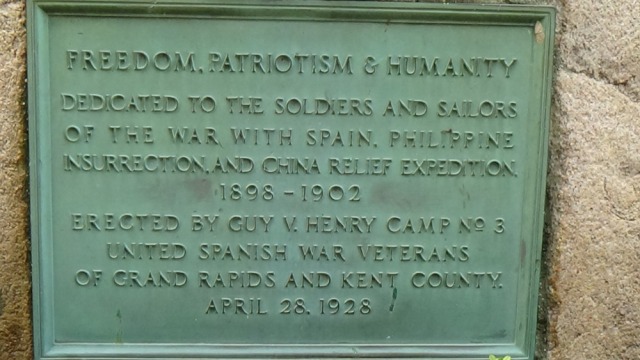 Despite the idealistic rhetoric on the plaque, the US engaged in racist military occupations that resulted in the murder of communities of color in each of those countries, with the most violence taking place in the Philippines, because of the insurrection that ensued to fight the US occupation.

According to Alfred McCoy’s book, Policing America’s Empire: The United States, the Philippines, and the Rise of the Surveillance State, the US killed 200,000 civilians in the Philippines. McCoy also cites a US General who commented:

It may be necessary to kill half of the Filipinos in order that the remaining half of the population may be advanced to a higher plane of life than their present semi-barbarous state affords.

In each case, the US military legacy has left a bloody path that continues to impact the Philippines, Cuba and Puerto Rico today. 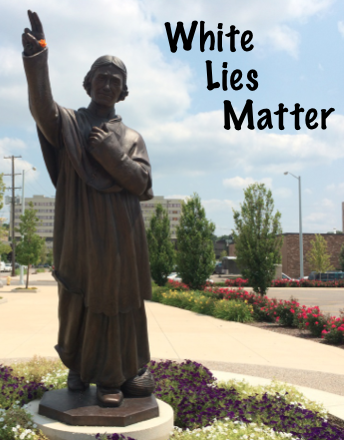 Another statue that should be considered for removal because it normalizes white supremacy, would be the statue that sits in Cathedral Square, by St. Andrews Catholic Church. The statue is that of Bishop Baraga and is part of the Community Legends project headed by Peter Secchia.

Bishop Baraga is credited with bringing Catholicism to Grand Rapids, but his real work was in his efforts to convert the Ojibway people throughout what is now called Michigan.

Baraga’s interaction with the Ojibway people also paved the way for genocidal policies that Europeans have implemented over the past 150 years in this area.

Those policies include the outright killing of Native people, stealing Native lands, forced relocation and taking Native children from their communities to put them in boarding schools, something the Catholic Church did in Michigan. The history of these boarding schools included denying Native children to speak their language, dress in traditional clothing, subjected to Christian teaching and also physical and sexual abuse, as is well documented in Kill the Indian, Save the Man: The Genocidal Impact of American Indian Residential Schools.

This is the legacy of Bishop Baraga, however well intentioned he was, since his commitment to converting the Ojibway paved the way for the harsh policies that followed.

Another statue to consider for removal is the statue in front of the Van Andel Arena that honors Amway co-founder, Jay Van Andel. Van Andel, like his Amway co-founder Rich deVos, funded numerous rightwing groups, both religious and secular.

At the national level Van Andel funded the Heritage Foundation. They wrote the incoming Reagan administrations policy guide Mandate for Change that advocated the elimination of Food Stamps, Medicare, child nutritional assistance, farm assistance, legal services for the poor, and the repeal of a $1,000 tax exemption for the elderly.

Jay Van Andel was deeply involved in the largest pro-business lobbying group in the country, the US Chamber of Commerce. In fact, Van Andel was Chairman of the national group for a period of time. The Chamber, which often likes to present itself as a defender of the small business owner, is one of the largest electoral contributors in the nation. According to Open Secrets, the US Chamber has spent $1.2 billion on lobbying since 1998. 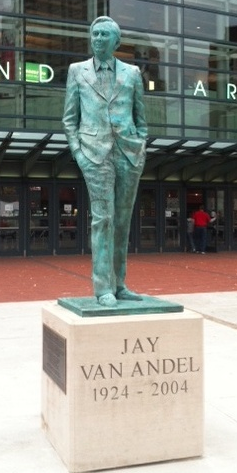 In addition, the US Chamber of Commerce has been one of the most consistent climate deniers in the country and has fought hard against any policy that supports working class people. The Chamber has opposed efforts to get paid sick leave policy passed and numerous other pro-worker policies. As Chairman of the US Chamber of Commerce, Van Andel made sure that whatever policies were being decided in Washington, they needed to benefit the capitalist class that he was a part of.

Maybe the least known of the groups that Van Andel was deeply involved with, was the National Endowment for Democracy, also known as NED. NED was created during the Reagan years as a mechanism to push neoliberal economic policies around the world and funding governments or political parties that would best serve the interest of the US. Allen Weinstein, who helped draft the legislation establishing NED, was quite candid when he said in 1991: “A lot of what we do today was done covertly 25 years ago by the CIA.”

Jay Van Andel was on the Board of Directors of the National Endowment for Democracy and served in that capacity while the NED was funding death squad governments in Central America, funding opposition parties in Nicaragua and supporting pro-US dictatorships throughout Latin America, Africa and the Middle East.

These are just three examples of statues that could be removed from Grand Rapids, because of their endorsement of White Supremacist values. Many more could be, and should be, considered for removal. However, what is more important than removing statues, would be for the dismantling of institutions that promote and practice white supremacy in Grand Rapids.