GR Press Coverage of the 1963 March on Detroit & Washington

Our last post looked at the Grand Rapids Press editorials on the 1963 March on Washington, with the main editorial practicing what we name as a form of white paternalism. Today’s post takes a look at the GR Press coverage of the 1963 march in Detroit and later in Washington DC. 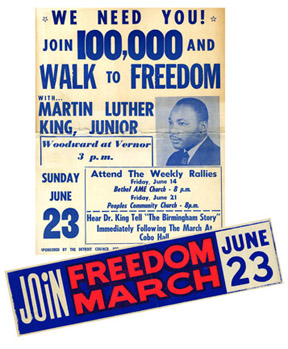 There were two articles in the Grand Rapids Press (Pages 1 – 4) about the march on Detroit in June of 1963, some two months before the march on Washington. Neither of the articles on the Detroit march were on the front page and a great deal of the focus was on whether or not the march was peaceful. There was some coverage of the fact that a list of demands on civil rights were made, but only a few of those demands were mentioned in the articles.

The June 23, 1963 march on Detroit was organized primarily by Dr. King’s organization, the Southern Christian Leadership Conference and the UAW. Both Dr. Martin Luther King Jr. and the UAW President Walter Reuther were featured speakers at the march.

In many ways, the Detroit march was held as sort of a test run to see if these organizations could pull off a march with hundreds of thousands of people. Detroit was chosen because the UAW had a large number of union members in the Motor City and Detroit was also one of the most critical northern cities with a major black population that was representative of police violence against blacks and other forms of structural racism.

In Preparation for the 1963 March on Washington

The first article on the 1963 march on Washington, DC, is a piece about the various groups that were organization delegations to participate. The GR Press article (on page 5) states that the UAW, the NAACP and the Congress on Racial Equality (CORE), were all sending people to participate in the historic march.

The same article in the GR Press mentions that the AFL-CIO, the Grand Rapids Urban League and the Human Relations Commission from the City of Grand Rapids, did not send their members to the historic march.

The first article on the march in August of 1963 (page 6) uses a photo of marchers with the Washington Monument in the background, with the headline that read, “Huge Rights Parade in Capital Orderly.”

The national mainstream news coverage of the march on Washington was obsessed with the idea that the only way that the march could be successful would be if it was passive and orderly. In fact, most of the major labor organizations and the Catholic Church told Dr. King and the other Civil Rights leaders that if civil disobedience would be part of the march, they would pull their support.

Another aspect of the march on Washington, DC in 1963, which is rarely discussed or even acknowledged, is that the Federal government had mobilized the military and law enforcement to make sure that people were not going to disrupt business as usual in the nation’s capital.

According to Gary Younge’s book, The Speech, the White House codenamed the March on Washington, Operation Operation Steep Hill. Younge writes, “One thousand troops and 30 helicopters were deployed in the DC area. The Pentagon put 19,000 troops on stand by. The Eighty Second Airborne Division, based in Fort Bragg, North Carolina, stood by with C-82 boxcars loaded with guns, ammunition, and food, ready at a moment’s notice to make the 320 mile trip to Andrews Air Force Base in Maryland, from which soldiers would be dispatched to the Mall by helicopter to quell riots. About six thousand law enforcement officers of different kinds would be deployed that day, all armed with guns, clubs and tear gas. The one concession to civil rights sensitivities was that there would be no dogs.”

This was the context in which the march took place, in terms of what the state was willing to allow those march to do.

On page 10 of the document, the Grand Rapids Press did publish a list of the 10 demands that the marchers were bringing to the nation’s capital that day.

The very next article on page 11 & 12, shows markers from Grand Rapids meeting with then Congressman Gerald R. Ford, with a headline reflecting how Congress was not in a hurry to listed to the demands of the marchers.

The subsequent article on page 13 provides some feedback from the kennedy administration on the historic march. Kennedy is quoted as saying he thinks the march help to further the “Negro cause.” What the GR Press article does not mention is that President Kennedy pleaded with the organizers of the 1963 march to stress personal responsibility. “It seems to me with all the influence that all you gentlemen have in the Negro community, that we could emphasize, which I think the Jewish community has done, on educating their children, on making them study, making them stay in school and all the rest.”

One final article from the Grand Rapids Press coverage of the 1963 March on Washington, was written after the marchers had returned from DC. The photo that accompanies the article shows 5 people, 4 with the NAACP and one from the UAW, looking at newspaper coverage of the march.

The article that accompanied the photo provided some basic reflection from the 5 featured in the article, about what they liked and what they were impressed by. Unfortunately, the article did not reflect any sense of urgency that the marchers had brought to DC that day, not much of a sense of the efforts put into making the march happen or the larger historical context of the 1963 march on Washington. Besides Gary Younge’s book, The Speech, another excellent resource is, Nobody Turn Me Around: A People’s History of the 1963 March on Washington, by Charles Euchner.