Anti-Iraq War organizing in Grand Rapids 2002 – 2008: Part VI – Local media reporting on the US war in Iraq and hyper-nationalism on the air

In Part I, we looked at the early organizing that took place in the fall of 2002, where various groups were organizing resistance to the possible US invasion of Iraq. In Part II, we talked about how some groups went to DC for a national march on MLK Day, but then President Bush came to Grand Rapids in late January 2003, where over 1,000 protestors greeted him.

In Part III, we explored the organizing effort of the Grand Rapids chapter of Women in Black and the local news media’s reaction to the Colin Powell presentation at the UN on WMDs, in early February of 2003. Part IV focused on student anti-war organizing and an action that took place at Congressman Ehlers office, resulting in several arrests. Part V in this series, we looked at the GRPD’s efforts to monitor and infiltrate anti-Iraq war efforts and the protest that took place on the first day of the US invasion of Iraq.

In today’s post we look at local media reporting on the US war in Iraq and how one radio station was overtly promoting the war.

Just weeks after the US invasion and occupation of Iraq began, some involved in anti-war organizing decided to challenge the local media with their hyper-nationalistic reporting and cheerleading.

In mid-April, anti-war protestors decided to hold a demonstration outside of the office of Citadel and Clear Channel radio, both of which were not only providing one-sided reporting on the US war against Iraq, but some of their DJs were using their airtime to dismiss and mock those who did not support the war. One DJ in particular, Rich Michaels 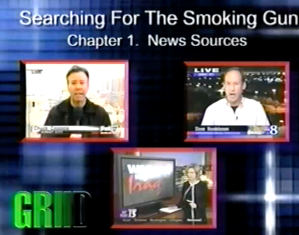 would mock anti-war demonstrators, saying they were cowards and during the early months of the war would begin his show saying, “Born and raised in America, it’s Michaels in the Morning.”

The Grand Rapids Institute for Information Democracy (GRIID) also conducted a six-week study of the Grand Rapids Press and the three TV news stations (WZZM, WXMI and WOODTV8) from a few days before the war began (March 17) through the first full week in May. The GRIID study looked at sources, framing, historical context and home-front coverage. You can view a 38 minute video analysis of their study, Searching for the Smoking Gun: Local Coverage of the War in Iraq.

This entry was posted in Anti-War/Anti-Imperialism and tagged Grand Rapids Iraq war news coverage, GRIID analysis of the local news and Iraq, protesting GR radio stations that supported the war. Bookmark the permalink.

1 Response to Anti-Iraq War organizing in Grand Rapids 2002 – 2008: Part VI – Local media reporting on the US war in Iraq and hyper-nationalism on the air