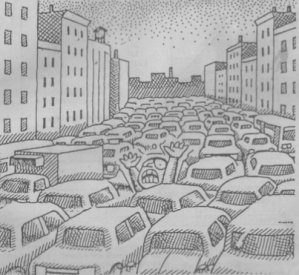 It is impossible to ignore the increased traffic congestion in Grand Rapids. While some may cite the road construction projects, the main factors are the increase in population and the overwhelming reliance on the use of cars.

In 1997, several people who were working on transportation issues with the West Michigan Environmental Action Council (WMEAC), published a study on the real costs of driving for Grand Rapids and surrounding communities.

Richa, one of the editors of the independent newspaper, known as the FUNdamentalist, was one of the co-authors of the study, and he published a summary of the findings in the July/August 1997 issue of the FUNdamentalist. You can read the entire summary at this link, but we also wanted to post some excerpts from that study.

First, the data from the study can be seen here: 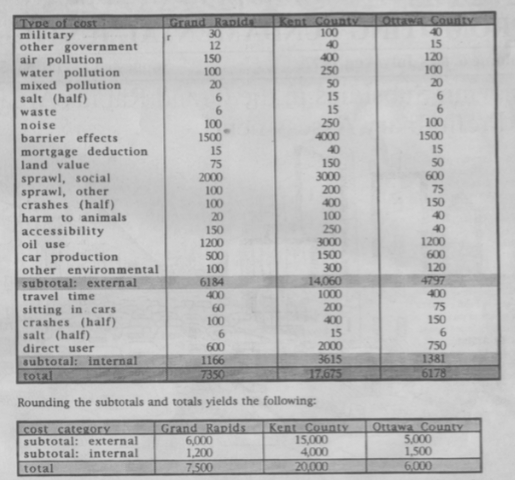 The numbers at the bottom represent a total cost to Grand Rapids at $6 Billion, with $5 Billion for Ottawa County and $15 Billion for Kent County respectively.

In addition, those who contributed to the study had some recommendations, which are included below. It is interesting to note that many of these recommendations have not really been implemented and one could certainly argue that the problems and the costs have only increased in the 22 years since the report was first published.

This entry was posted in Environmental Movement and tagged 1997 Cost of traffic study in Grand Rapids, dependence on fossil fuel vehicles, ecological and human cost of cars in Grand Rapids, WMEAC. Bookmark the permalink.