What kind of response did a Grand Rapids CRC Pastor get from the Prime Minister of South Africa in 1954 when asking about the system of Apartheid?

Since December of 2014, we have been engaged in research on the movement in Grand Rapids to end the system of Apartheid in South Africa.

Like most of the international anti-Apartheid movement, Grand Rapids engaged in education, confronting government and corporate institutions and ultimately focusing on Divestment as a strategy to break to power that White South Africans held over the majority of Black South Africans. 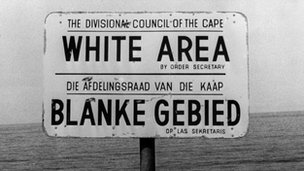 We have posted stories on the victories won by organizers to get the City of Grand Rapids to divest, the Grand Rapids School Board to divest and even Calvin College to divest.

However, one thing that made Grand Rapids somewhat unique was the interest of the Dutch South African power structure to how the Dutch Christian Reformed Church community was dealing with the international campaign to end Apartheid. We noted in our interview with Doug Van Doren, that when the South Africa government sent a high ranking official to the US in the 1980s to respond to the growing anti-Apartheid movement, the only place this official visited (outside of DC), was Grand Rapids.

This should not come as a surprise to those who are familiar with the history of the CRC and racial policy. In Todd Robinson’s book, A City Within a City: The Black Freedom Struggle in Grand Rapids, Michigan, the author documents well the resistance from the predominantly White Dutch power structure to efforts by the Black community to gain more rights in West Michigan since the 1930s. Robinson names the system of institutionalized racism in Grand Rapids as “Managerial Racism,” where the White power structure overtly managed what the Black community could do.

The letter is divided into essentially three sections. First, the South African official provides a framework for why Apartheid is not only necessary, but should be seen as, “arising from a deep-rooted color consciousness of the White South Africans.”

The difference in color in merely the physical manifestation of the contrast between two irreconcilable ways of life, between barbarism and civilization, between heathenism and Christianity, and finally between overwhelming numerical odds on the one hand and insignificant numbers of the other.

The third and final section of the letter was a justification of South African Apartheid on political grounds. Here the White South African writer points out the usual justification for White Supremacy, such as how taxes are used, the creation of “Advisory Boards” and how Black South Africa children are getting a free education from the White ruling class.

The Grand Rapids Anti-Apartheid movement was able to achieve victories that contributed to the end of Racial Apartheid in South Africa. These victories came about in part by overcoming the religious and political framework of White Supremacy that informed those within the White and Christian community in Grand Rapids. And while White Supremacy is still deeply rooted in Grand Rapids, we must learn from the gains that have been made by those fighting for racial justice.