It’s not important that we win every battle. What’s important is that we fight. Interview with Cole Dorsey on the History of Animal Rights Organizing in West Michigan

We recently interviewed Cole Dorsey, who was an active member of West Michigan for Animals in the 1990s in Grand Rapids.

How old were you when you joined West MI for Animals? What motivated you or inspired you to get involved with Animal Rights/Animal Liberation?

Cole – I joined WMFA when I was 13. My aunt had a big impact on me and she had been a member of PETA. She had old PETA magazines and it was there that I had my first exposure to not only the animal rights movement but also to contemporary examples of people participating in civil disobedience for what they believed in.

I contacted the national office of PETA  and asked for contact information for local members to get involved with. They sent me a large list of animal rights groups across the Midwest. Most notable to me then and the proceeding years were WMFA and KALL (Kalamazoo Animal Liberation League). It was with these groups that I devoted much of my time for the next couple years.

Since we were just a high school student at the time, did you experience any discrimination and different treatment because of your age?

Cole – Actually I was in middle school when I joined. I didn’t experience anything different at first. At first I was warmly welcomed by everyone.

One of the first things I remember I did with WMFA was go with an older member to a conference of companies selling science related products. The purpose was to find examples of products and projects that could be used in place of animal dissection in public schools. A lot of work was put into this by Harold Mercer especially. He wrote articles and made contact with many of the local schools administration. ‘We could then go to the administration of local school districts and present our alternatives and reasons why schools should give up animal dissection from its curriculum’. That was the strategy as it was explained to me. Although I respected that that work was being done I wasn’t interested in that strategy. I wanted direct action. I wanted to shut down fur stores, rodeos, circuses, animal factories, and vivisection laboratories by any means. The majority of the rest of the members felt the same way which became more evident, and divisive, as I started organizing protests at the fur stores as a WMFA member.

What kinds of campaigns and actions were you involved in? and can you give some examples of specific actions?

Cole – I liked WMFA and KALL very much because they used a variety of tactics not just stand and picket. I was always down for a protest but I wanted to also be active. I wanted to stand in the driveway of the fur store or vivisection laboratory and not allow business to continue as usual. We decide what happens and “we’re shutting this down”. When the police come we then decide whether to cede or not. The point being that we are not sitting idly by with our signs. 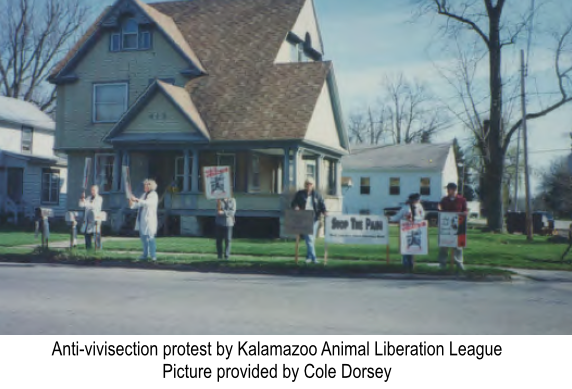 We are putting our bodies on the line and saying “no more.” Even if it only lasted until the cops came or some people got arrested it felt more fulfilling than just standing for hours with a sign while people screamed obscenities at you from their car as they drove by which it felt like a lot of times.

The only protest activity that the Humane Society was doing at that time was against the Klein Rodeo in Sparta. Most of their protesters were old and would sit in lawn chairs and hold their signs. Some had umbrellas for the 2 hour protest. We would discuss how we wanted WMFA to be different. We didn’t want to just attend an obligatory protest because we’re an animal rights group. We wanted to do whatever it took to end the rodeos, fur trade, factory farms…

We tabled literature at public events. Some of us went to a tabling that KALL had in a shopping mall. It gave us the idea to begin tabling more broadly. I remembered we were allowed to table inside the Target store on Alpine a couple times. We had some graphic literature of animal victims of product testing and the pharmaceutical companies whose products were animal tested. After a couple times we weren’t invited back. We continued to table at public events and teamed up with some of the local nutrition and pet food stores for “dog wash” fundraisers. 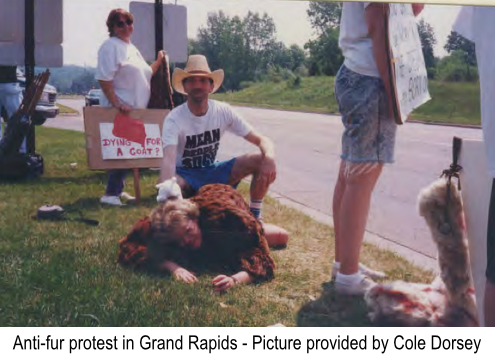 More importantly, I think, was that these groups obtained, released, and pressured businesses that sponsored animal abuse ie rodeos, circuses, etc. There were definitely results from phone calls,letters, and picketing of businesses that sponsored animal abusive entertainment. We spent a whole summer of picketing, every weekend, a carriage company in downtown Grand Rapids. The owners of the horse drawn carriage company were also attempting to start a new rodeo in a small town north of GR called “The Circle R Rodeo” if I remember correctly.  Several of us went to a few of the first rodeos in an attempt to document animal abuse and potential violations. Even though we attempted to “blend in” we eventually were identified and denied entry.

We regularly protested each of the 4 fur stores in town. Also the circus whenever it was in town.

Many of us went a lot to support groups and actions in other cities. Mostly, KALL in Kalamazoo and a group in Chicago. I remember going to one of the anti-fur actions in Chicago where several people were arrested for chaining themselves to the door and denying access to everyone. That had a big impact on me.

What was the public response to the animal rights/animal liberation activity you were involved in then?

Cole – It really depended on the action.  Typically it would usually be 50/50 in public support at our protests. People would yell at us to “get a job” as they sped by while others would give us honks in support.

The rodeo and circus protests were definitely more aggressive because we were coming face-to-face with those attending these events. 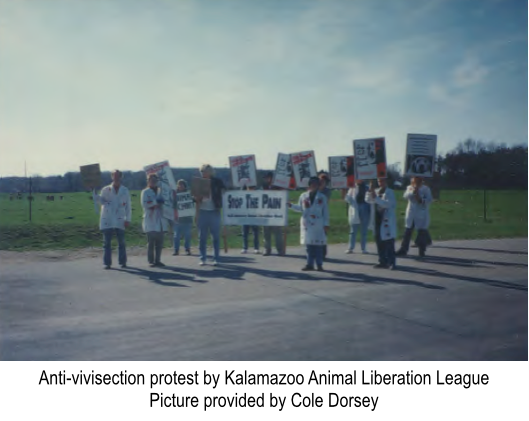 What kind of tactics were used by WMFA?

Cole – Aside from protesting members were writing letters, and making phone calls to pressure sponsors to end support of rodeos and circuses and for department stores to stop selling fur.

There was also direct action going on at that time that was not sanctioned by WMFA or undertaken by any “organized” group.  I know that roadkill was delivered to the steps of fur stores and that fur coats were damaged on the racks of their stores. I know that “blood” was splashed on their windows and windows were broken. I also know that more than one fur coat got splashed with “blood” while being worn in public in Grand Rapids. I believe all these actions collectively, coupled with society’s changing attitude towards fur, had a major impact on the fur industry in GR. Today I think Leigh’s in East Grand Rapids is the only store selling furs these days.

There were attempts made to covertly document animal abuse at circuses and rodeos.

We publicly shamed those wearing fur as they left GR Symphony performances.

How did you involvement in West Michigan for Animals impact your involvement with other radical, social justice issues?

Cole – I was involved actively with WMFA until I began going to meetings put on by The Socialist, Frank Girard and then shortly thereafter organized into the IWW. It was then that I learned about and began to study capitalism and its affects on the world. I then understood that there will be no animal liberation until the working class overthrows the ruling class and capitalism. I fully support all those in the animal liberation movement today even though I think we should organize on our jobs, and in our industries, into One Big Union to “live in harmony with the Earth” as the IWW Preamble states. I believe animal liberation can only come after we overthrow capitalism and the ruling class.

After being organized into the IWW I also become involved in organizing actions against police brutality/murder. This work was done as a member of Revolutionary Anarchist Youth (Grand Rapids).

I learned at an early age not to cross a picket line. That includes animal rights pickets.

Were there any lasting relationships developed as a result of your involvement with WMFA?

Cole – Unfortunately, I got involved in drugs as a teenager and ended up being locked up for a few years. I lost contact then but have since regained contact with some old members of WMFA through social media.

In looking at some of the archival material from WMFA, it is clear that there was some tension between a more reformist approach and a more liberationist approach. How did you navigate that tension during your time with WMFA?

Cole – Navigate it? Shit, it caused a split. I was more interested in direct action/civil disobedience and animal liberation. ‘No compromise’ was my attitude. Soon after I joined it was clear that this attitude was shared by most of the other members of the group. Except the “leadership”.

It came to a head at the meeting following our most recent cascade fur salon protest. It was my third protest at that location with WMFA. It was the first that we were walking back and forth across the driveway to block potential costumers. A contingent of us went into the store to confront a costumer and the owner. It was the first time the police had been called to a WMFA action. It became a point of contention.

At the meeting my actions and my age were brought up. The argument was, ‘if he gets arrested or injured we will be held liable and open to lawsuit because he’s a minor’. They wanted to make being at least 18 years old a requirement for membership. It was rejected and that fraction of the group  left and quit participating in any way with WMFA.

Do you think it is important for the current generation of Animal Rights/Animal Liberation activists to be familiar with the work done by previous generations? If yes, why?

Cole – Absolutely. We should always know and learn what has worked and what hasn’t  in movements for social/economic justice. Knowing that putting pressure on sponsors was effective for us 20 years ago can be useful for those trying to put an end to animal abusive entertainment today.

There is an old IWW saying, “It’s the fights themselves that prepare the worker for even greater tasks and victories.” It’s not important that we win every battle. What’s important is that we fight.

1 Response to It’s not important that we win every battle. What’s important is that we fight. Interview with Cole Dorsey on the History of Animal Rights Organizing in West Michigan