Last month we posted a piece that names the founding of Grand Rapids as a manifestation of Settler Colonialism. We pointed out that Native communities that lived along the Washtanong, what Settler Colonialists now call the Grand River.

We also pointed out that there were a variety of tactics used to remove Native communities, a process that laid the foundation of the birth of Grand Rapids. Two of the main tactics used in the pacification of Native communities and ultimately their removal were a series of treaties and the role of christian missions.

The Law and Settler Colonial Occupation 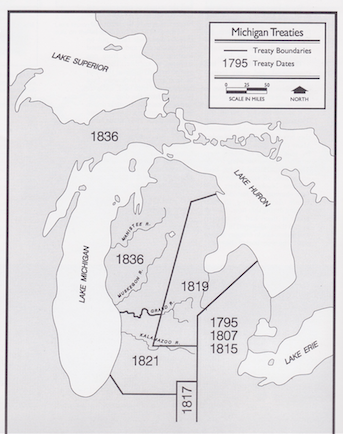 US expansion at the end of the 18th century and the beginning of the 19th century required the ratification of legal agreements between the young settler colonial government and Native nations. I use the term nations, because treaties can only be signed between two sovereign nations. This fact, while evident, needs to be restated, since there is ongoing denial about the sovereign status of Native nations and a blatant refusal by the descendants of settler colonialists that the land we current live on is occupied. As Native activist and member of the Little River Band of Ottawa Indians, Lee Sprague, regularly reminds people in his public talks, by saying, “I come from the land currently occupied by the State of Michigan.”

The territory that would eventually become the state of Michigan in 1837, was negotiated through a variety of treaties. (see map above). This series of treaties was signed by the US government with members of the Odawa, Ojibway, and Potawatomi nations. This map below shows the areas of land that were inhabited by the Odawa, Ojibway, and Potawatomi nations. 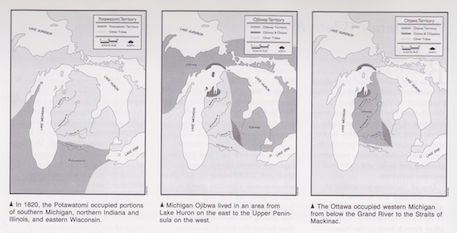 The primary treaty that impacted what is now West Michigan, was the 1821 Treaty of Chicago. This treaty is significant, since it is with this treaty the process of land speculation and the construction of missions began along the Grand River.

The Treaty of Chicago was the major legal mechanism that allowed White Settlers to purchase and occupy land in West Michigan. However, it is important to note that between 1810 and 1830, when these treaties were being crafted and ratified between the US government and Native nations, the US recognized that the defeat of the British in the War of 1812 meant that England was no longer the primary barrier to US expansion. The primary barrier to US expansion was Native sovereignty.

While the Treaty of Chicago legalized relations with Native tribes in what settler colonialists call Michigan, the US government began to ignore such legal claims in their quest for access of more land. US Supreme Court Justice John Marshall began to interpret the US relationship with Native nations as problematic. Marshall put forth the notion that, “while native peoples are entitled to exercise some range of autonomy in managing our affairs within our own territories, both the limits of that autonomy and the extent of the territories involved can be ‘naturally’ and unilaterally established by the US.” (pg. 9, Perversions of Justice: Indigenous People’s and Angloamerican Law) In essence, Marshall’s interpretation of the law would eventually mean that Native land really belonged to Settler Colonialists and that Native people are simply an obstacle to US expansion. Thus the Marshall Doctrine began a period of forced removal of Native nations, implemented most vigorously by Andrew Jackson.

Therefore, even though there was a legal agreement between the US government and Native nations in Michigan, the expansion of white settlements superseded Native sovereignty. In the Michigan territories, forced removal was nothing like that of what befell the Cherokee nation, but with the assistance of christian missionaries, Native communities would decreased in numbers while white settlers began to slowly take control of the land along the Grand River.

Churches and the Expansion of Settler Colonialism in West Michigan

Before we look at the impact that christian missions had on Native communities in what is now Grand Rapids, it’s important to have a framework in which to understand this history. The United Nations Convention on Genocide  provides clear principles for determining when genocide is committed. It is important to note that their definition is not simply limited to the physical destruction of Indigenous people, but can also include forced relocation and transferring children from one group to another.

However, on the matter of christian missions attempting to make converts of Native communities in the 1820s and 1830s along the Grand River, it is less clear on whether or not this could be defined as a form of genocide. How much free will did Native people have on choosing another religion? Was the adoption of christian beliefs a form of assimilation into the dominant culture and was it tied to larger socio-economic issues like food and land?

It should come as no surprise that right after the 1821 Treaty was signed, the first christian missions came to what is now West Michigan. The Baptist Church established a mission in 1824, under the leadership of Isaac McCoy, and Catholic missions were begun in 1833 by Fr. Frederic Baraga.

One of the things that lured missionaries to the area after the signing of the Treaty of Chicago, was a provision in the treaty which allowed funds for people to work as teachers of blacksmiths amongst the Native people along the Grand River. The government treaty called this, the “civilization fund,” a phrase that underscores the settler colonial mentality.

Isaac McCoy first arrived in 1823, only to discover: “Many Odawa were drinking and few responded to his call for a council. After some inquiries McCoy learned that the majority regarded the 1821 treaty as fraudulent and viewed his visit as an attempt to trick them into ratifying it.” (pg. 7, from Gathered at the River: Grand Rapids, Michigan and Its People of Faith) 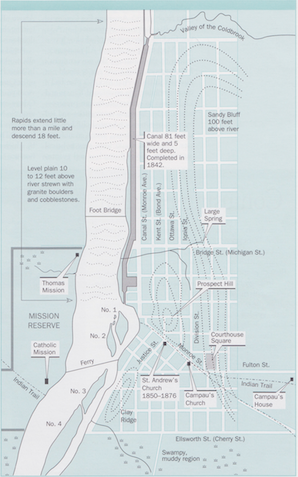 Such a statement reflects not only that the Native people along the Grand were not in support of the government imposed treaty, but that many Natives were negatively impacted by alcohol. Alcohol was introduced by French fur traders, particularly Louis Campau and should be seen as another tool used by settler colonialism to control Native people.

McCoy, however, was not deterred from his initial observations and continued to use all means at his disposal to “win over” the hearts and minds of Native people. In 1826, McCoy set up the Thomas Mission on the westside of the Grand River (as shown in this map). McCoy’s greatest contribution during his time along the Grand River was his relationship with Native leader Nawequageezhig, whom the white settlers call Noonday.

Noonday was one of the few Native leaders who signed the 1821 Treaty of Chicago and was viewed by many as a traitor or collaborator with the settler colonialists. Noonday went as far as to be baptized by McCoy’s successor, Rev. Leonard Slater in the summer of 1827. Another Native leader in the area, Kewwaycooshcum, also known as Blackskin, did not sign the 1821 treaty, but did develop a relationship with the catholics through his connection to Campau. It is hard to know from the limited documentation of that time, whether or not the Native people were using the tensions between the various christian factions to their benefit or if the christian were using Native compliance with the government as a means to an end. One gets a sense of the christian rivalry in a comment from Fr. Baraga, who said, “Mary, to who it is given to root out all heresies of the world……to destroy the false [Protestant} teachings with which some of the poor Indians were already infected, and suffer on His gospel to reign everywhere.” (pg. 12, from Gathered at the River: Grand Rapids, Michigan and Its People of Faith)

However, whatever tensions existed, they were most useful in pushing Native people out of the area as more white settlers came to the area. This increase in settlers, along with greater desire for land and settler colonial expansion resulted in a new treaty being drawn up, the Treaty of Washington in 1836. This treaty turned over an additional 13,837,207 acres of land to settler colonialism’s expansionist desires.

It seems that all along, the goal with relations of Native people along the Grand were to take the rest of their land. Whether or not there was direct complicity with the early christian missions to this land takeover is not relevant, the fact remains that they did nothing to resist such an effort. 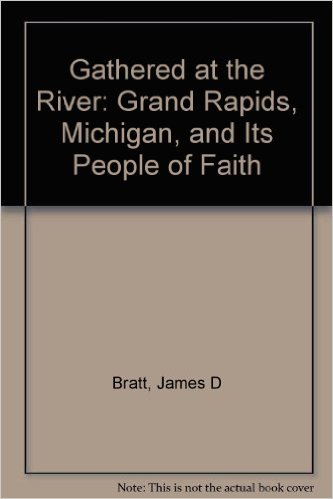 The end of chapter one from Gathered at the River: Grand Rapids, Michigan and Its People of Faith, states of the fate of Native people in West Michigan:

Keeping title proved difficult, however, as fraud, inexperience, and incompatibility of family farming with tribal tradition took their toll.

It indeed took its toll, but the authors of Gathered at the River do not call it land theft or settler colonialism or even acknowledge the role that early missions played here in the ongoing genocidal policies of US expansionism. The plight of Native people is not addressed in the rest of the book, which simply goes on to celebrate the history of christian churches in Grand Rapids. However, it seems apparent to this writer that the history of christianity in West Michigan is founded on genocide and settler colonialism. We would do well to acknowledge this history to inform how we move forward in the struggle for justice today.

12 Responses to The Role of Church & State in Native Displacement in West MI : Settler Colonialism in Grand Rapids Part II