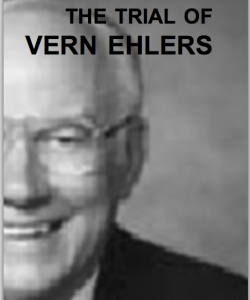 In 2003, just months after the US invasion/occupation of Iraq had begun, activists in Grand Rapids with the People’s Alliance for Justice & Change organized a mock trial for then Michigan Congressman Vern Ehlers.

The mock trial was a piece of performance art designed to dramatize the human rights violations and war crimes that the West Michigan Congressman was complicit in, since he consistently vote for ongoing military operations and funding for the US military in Iraq.

The trial organizers did send a People’s Subpoena to Congressman Ehlers office in Grand Rapids, but he never responded. The trial script was written by John Rich, a script you can read here, along with supporting documents on the war crimes committed by the US military in Iraq, crimes which the Congressman supported.

The trial was also broadcast on the public access TV station, GRTV, as well as being posted on line. The video is 33 minutes long and involved several characters to address specific issues related to the US invasion/occupation of Iraq.

This action was part of a larger campaign by anti-war activists responding to the US war in Iraq.

This entry was posted in Anti-War/Anti-Imperialism and tagged trial of vern ehlers, US war crimes, US war in Iraq. Bookmark the permalink.

2 Responses to The Trial of Vern Ehlers: Dramatizing War Crimes