This article is from a November/December, 1996, issue of the Independent Grand Rapids newspaper, The FUNdamentalist.

With banners that read, “Chief Hegarty, when will the brutality end?” and “fists and guns don’t protect and serve,” over 200 people marched on October 22nd in conjunction with the National Day of Protest Against Police Brutality. 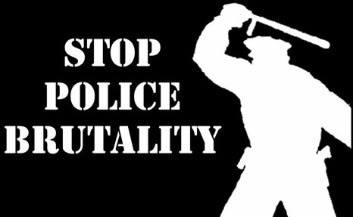 The damp weather did not deter the mostly young crowd of people who came to express their rage against an issue that has plagued this community for years, but has recently brought together citizens to fight against this injustice. March organizer Leslie Grossman said, “we hope people will see us and realize that things are out of hand and wake up to see what is going on.”

The march organizers were Leslie, Cole Dorsey and other young people in the area associated with the Anarchist Black Cross movement. The local group formed around the issues of political prisoners, especially Mumia Abu-Jamal, and police brutality in Grand Rapids. Usually referred to as “punkers” by people who don’t know them personally, these young folks organized this event in Grand Rapids not just because of political convictions, but also because they know what it is like to be victims of police abuse.

In September of this year many of them were hanging out on the Monroe Mall, a usual place to meet friends and have fun. Nearly one hundred of them had gathered when suddenly two cop cars appeared. One of them, Phil Holman, was approached about being an under-age smoker. He was asked to accompany the police to their car. He co-operated, but while walking in the direction of one of the police cars and officer grabbed him from behind and forcefully brought him to the car. This got the attention of the other people who were hanging out that day, causing many of them to walk towards the cop cars to have a closed look at what was going on.

Believing that the cops were using unnecessary force against Phil, some of them began to ask the names and badge numbers of the officers. A young man named Crabs was arrested for doing this too close to a cop car. Cole Dorsey said he was thrown into one of the cop cars for telling others to get badge numbers. Kevin was also arrested and suffered the worst abuse. He was thrown up against a cop car so hard it caused him to bleed from the head. In all, six people were arrested and taken downtown. 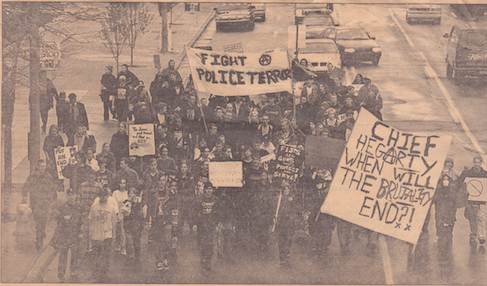 While being processed Cole was asked by one of the cops if he was “for Paul Mayhue?” Cole said that he was in support of the petition drive efforts that Mayhue and others were involved in to create a civilian police review board. Cole said that the officer then stated, “He (Mayhue) is just like the rest. As soon as they get a Civilian Review Board it will be as corrupt as all the other cities.” This seemed a bit bit telling about the police department’s contempt for citizen involvement in city affairs. Kevin, who had been bleeding, had his picture taken like the rest. After cleaning up his face the police told him that they needed to take another picture since the first one “didn’t turn out well.” Coincidence?

Another young woman who was at the arrest scene said that the police had a copy of a flyer that the group had been circulating for some time. The officer crumbled it up and threw it on the ground in disgust. Someone pointed out that this was littering and another officer cited him for the violation. It was discovered later that the officer received 3 weeks suspension for this infraction. None of the officers were suspended for excessive force.

I asked Cole if he felt they were using under-age smoking as a pretext to harass them because of their public stand against police abuse. Cole was convinced that this was the case and felt that regardless of whether the officers agreed with them or not, it was a violation of their free speech rights.

The anti-police brutality march wove through the downtown area with most of the participants walking in the streets. This certainly got the attention of motorists and other on-lookers. With high energy the march finally made its way to the Hall of (In)Justice for a short rally.

At the rally many people spoke up and expressed different aspects of the struggle against police brutality. Paul Mayhue and other members of the West Michigan March delegation praised the young crowd for their courage and commitment to work for justice. Paul also encouraged all to contact City Hall and demand that the Civilian Review Board be implemented at once. Other people made reference to the recent police harassment of Heartside residents since the opening of the Van Andel arena. One woman who carried a large picture of Judge Carol Irons, said that the judge was murdered by her husband who was a police officer. he ended up receiving a sentence that was less than a previous charge for his unprofessional behavior as a cop. This underscored the almost untouchable status of police officers.

March organizer Leslie Grossman said, “this was just the beginning. We are going to work to end police violence in this city.” As long as people can maintain the enthusiasm and work to deal with the ongoing abuse as was communicated by numerous march participants, this citizen movement could continue to grow and challenge the present government policies that do not protect the public against police violence.