(This is the second posting on Haiti in 1993 during the US Embargo against the country that was meant to punish the Aristide government for defying US policy. The first posting dealt with a Grand Rapids company that was profiting from cheap Haitian labor at the time. This article is reprinted from the Fundamentalist 1993.)

The Haiti Baptist Mission has an office in Rockford, Michigan. Cliff Welsh (former GVSU professor) mentioned it as being one of the prominent missions in Haiti.

Mission literature describes itself this way:

The Baptist Haiti Mission serves more than 250 Haitian-pastored churches with thousands of members. More churches are being built every year to meet the growing demand of Haitians turning away from Voodoo and turning to Christ.”

Voodoo derives from various religious traditions, particularly African, and is the predominant religion in Haiti.

Literature says the Mission runs various health clinics and services, agricultural programs, education, child care and other programs, all of which are strongly Christian-centered. It says the Mission began shortly after John Turnbull came to Haiti in 1934 and “recognized the tremendous needs of the people. He determined that with God’s help he could effect both physical and spiritual change in the lives of the people of this impoverished nation.”

Judy Zylstra,a Christian Reformed World Relief Committee missionary who now works with Haitian refugees, says of the Baptist Haiti Mission, “I see them working in a very good way. Evangelism is a much bigger part of their mission than ours. They had self-help crafts; they provide jobs for local people.”

A story in the Grand Rapids corporate daily paper, The Grand Rapids Press, on the Baptist Haiti Mission, written early in 1990, was titled, “Generations of Service,” with a subtitled “Turnbull family’s mission centers on spiritual and social needs of Haiti.” It says the Mission has set up “schools, hospitals and churches,” and has helped to dramatically reduce the illiteracy rate. It quotes Turnbull as claiming Voodoo, the indigenous Haitian religion, is largely responsible for the country’s poverty. 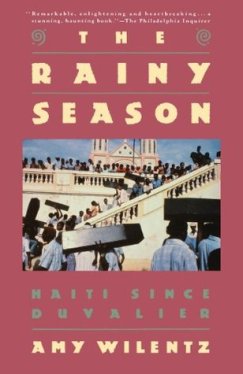 The article notes that the Mission is not specifically Baptist, but receives support from Methodists, Episcopalians and Catholics, amongst others.

The article did not quote any practitioners of Voodoo or others who may have been critical, despite the fact that a book had then recently come out that offered a far different perspective on the Mission and its activities. Amy Wilentz, in her 1989 book, The Rainy Season: Haiti Since Duvalier,” has the following to say about the Mission:

“They’re so stupid. To us, it looks like utter stupidity, but that is the African mind.”     Wallace Turnbull

Wilentz goes on to say that Wallace Turnbull, who has been “a fixture on the Haitian scene since the 1950s,” now runs “a large plantation-style mission” that is “next door to the Duvaliers, former mountain retreat.” The Duvalier’s, with considerable USA government support, ran one of the most brutal and corrupt dictatorships in the world for 34 years.

Wilentz says that Turnbull has strongly opposed Aristide and has started or contributed to numerous false rumors designed to discredit the highly popular leader.

Describing the Mission itself, Wilentz says that of many missions in Haiti, Turnbull’s is “The most famous and perhaps the most grandiose of all.” It “now has 250 branches throughout Haiti.” At the main mission in Haiti, Turnbull “presides over some 250 Haitians who call him ‘Bos,’ and who rake and hoe and harvest and sew in return for clothing and religious schooling and care from the small but clean medical clinic.”

“In general, Pastor Wally doesn’t pay his workers, he feeds them, usually with food from CARE’s Food for Work program. The mission uses the food as pay, which saves the mission money. Here, Food for Work once again has all the earmarks of slavery except that the peasants who work the mission land do not receive a parcel of land for their own cultivation.”