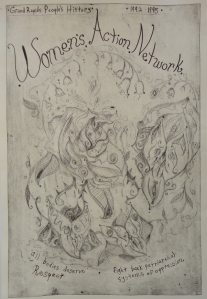 The Womyn’s Action Network (WAN) only lasted for three years (1992 – 1995) in Grand Rapids, but their impact was significant.

Two new prints honor the work of WAN. The first print, created by Natalie Schunk, pays homage to the general spirit of the vision that the Womyn’s Action Network came to embody.

This print reflects the beauty, dignity and creativity that made up the ethos of the Womyn’s Action Network. The visually driven print captures the essence of the organization, both in image and the few words that accompany it…….All Bodies Deserve Respect and Fight Back Patriarchal Systems of Oppression.

The Womyn’s Action Network gave out Dick awards for the most misogynistic forms of media representation, and the Jane awards went to examples where women were represented as smart, powerful, confident and creative.

The Dick & Jane awards event was both informative and fun, since WAN was deeply committed to celebrating women, often using satire in the tradition of the Guerrilla Girls.