This article is part of a larger project that will look at the various feminist movements in Grand Rapids. We are grateful for the following information that came to us by the late Karen Henry, a co-founder of the Womyn’s Action Network)

In recent years there has been a variety of activities and actions around the rallying cry of fighting “The War on Women.”

The cause for this effort has primarily been the recent national and state efforts to diminish legal protects for women around reproductive rights and rape. The organizing has mostly been inside the electoral framework of fighting legislation and supporting or opposing political candidates. While electoral politics is one strategic approach to fighting for women’s rights, it is certainly not the only one.

Organizing and movements for women’s rights and gender equality have existed in Grand Rapids for over 100 years, with women participating in the Suffrage Movement, the Civil Rights Movement, Sexual Assault/Anti-Rape Movements and other manifestations of feminism.

WAN came together in 1992 and began their feminist work with a satirical event that took on media representation of women. The First Annual Media Bash was an awards ceremony, where those in attendance would look at misogynistic and empowering images of women and then give out what they called Dick and Jane awards. The Dick awards were given out to the ads that “are the most degrading, demeaning and disgusting,” while the Jane awards were given to “those ads that portray us in the most positive and affirming ways.” 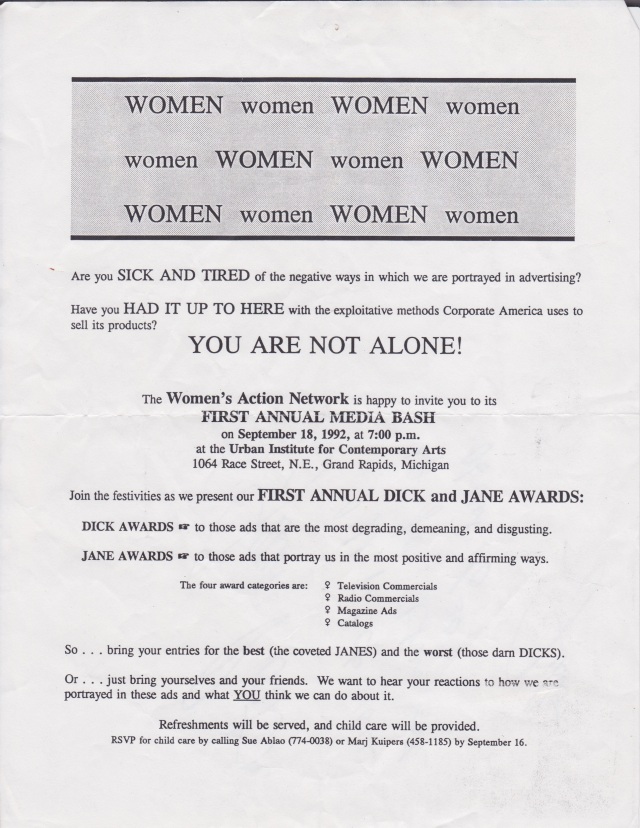 In addition to the Media Bash, WAN organized or participated in Take Back the Night marches, challenged sexist local radio billboards (WKLQ), spoke on campuses, facilitated forums and created a Women Now Forever Scholarship. The scholarship was for women attending or wanting to attend college and gave preference to women of color and Lesbian or Bisexual women.

The organization’s literature states that it was committed to looking at issues through a race/class/gender lens; challenging corporate defined beauty; fighting femicide, rape, battering and harassment; and looking at women’s health issues, like breast cancer, menopause and menstruation.

WAN only survived for three years (1992 – 1995), but accomplished an amazing amount of work in that brief time and inspired many women in Grand Rapids to find their voices and fight back against patriarchal systems of oppression.

1 Response to Womyn’s Action Network: Practicing Feminism in Grand Rapids in the 90s