(This article is part of a larger project about the Grand Rapids Central American Sanctuary Project. As a matter of full disclosure, this writer was part of that effort.)

In the late 1970s and 1980s, US funded counter-insurgency wars were being waged in El Salvador and Guatemala, activists along the US/Mexican border began to see a sharp rise in the number of political refugees entering the country. 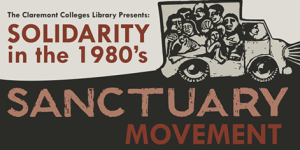 As communities began to offer safety to these refugees, they realized that all of them had a similar narrative. Each of the refugees told them that they fled their country because they either witnessed the torture and murder of family members or they themselves were torture survivors.

The US financed death squads in El Salvador and Guatemala was the primary source of the displacement of hundreds of thousands of people coming from Central America in the 1980s. US activists began to hear these stories in greater numbers and since the Reagan administration did not acknowledge Salvadoran or Guatemalan refugees as being political refugees, the US Sanctuary Movement was born.

The US Sanctuary Movement was begun by US faith-based communities that believed that they should offer sanitary for their fellow humans who were fleeing violence, even if it meant violating US laws.

Beginning in the Southwestern part of the country, Sanctuaries began popping up, where faith-based groups began to house people fleeing violence and to provide them with a forum to tell their stories.

The Grand Rapids Sanctuary was run by members of the Koinonia House, a housing collective that had begun in 1984 and did much of their organizing around resisting US Policy in Central America.

The seven members of the Koinonia House decided in the fall of 1985 to be part of the Central American Sanctuary Movement and traveled to Chicago to meet with the national coordinator of the project, the Chicago Religious Task Force on Central America.

One major aspect of becoming a sanctuary was the need for those seeking to declare to obtain as much support from the community, especially in the form of letters. Such letters were a sign that Koinonia House would indeed be trusted with doing the work and it signaled to the federal authorities that those who signed the letters stood with the members of the Grand Rapids Sanctuary. Koinonia House received dozens of letters of endorsement, from churches, community and university organizations, individuals and parents. Here is a copy of the letter sent by the Dominican Priests of Grand Rapids.

Once the Koinonia House had significant community support for becoming a Sanctuary, they set a date in to declare themselves a place that would defy the federal government and provide sanctuary to Central American Refugees.

Koinonia House declared themselves a Sanctuary in the fall of 1986 on the steps of the Gerald Ford Federal building in downtown Grand Rapids, as it was custom to make this declaration public. Members of the Detroit and Lansing Sanctuaries were present, with Fr. Dick Preston (pictured here wearing the dark brown poncho) leading a ceremony to honor the public commitment being taken on by Koinonia House.

Several months later, the Chicago Religious Task Force on Central America contacted members of the Koinonia House and told them they had 2 Indigenous families from Guatemala in need of Sanctuary.

In April of 1987, six adults and one child arrived in Grand Rapids at the Koinonia House. A few days later a press conference was held on the front porch of the Koinonia House (pictured below) and this marked the beginning of several years that the Grand Rapids Sanctuary offered a safe haven for those who were fleeing violence in Central America.