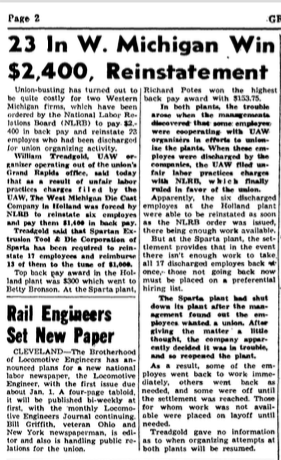 Thanks to longtime local labor historian Michael Johnston, the Grand Rapids Public Library now has both hard copy and digital archives of several different labor press sources from 1955 to the present.

As a sample of some of the labor news archives, we found a January 1957 article in the Grand Rapids CIO News that focuses on a union victory at local companies that were attempting to engage in union busting…..posted here above, on the right.

Another, more recent article is from the Grand Valley Labor News, in a June 2000 edition. In this article, there is a story about an anti-World Bank protest held in Grand Rapids, where a World Bank official was meeting with members of the Grand Rapids Econ Club. (seen here on the left) We have written about this same protest in the summer of 2000, utilizing reporting from the indy media source media mouse.

This new labor press archive will provide anyone important insight into news from the perspective of organized labor in Grand Rapids, a perspective that is often ignore by the mainstream press.

A special thanks to the Grand Rapids Public Library for making these archives available and to Michael Johnston for preserving and sharing them with the public.