A History of Anarchism in Grand Rapids

Several years ago, Sprout Distro published a 4 part series of zines on the history of Anarchism in Grand Rapids. 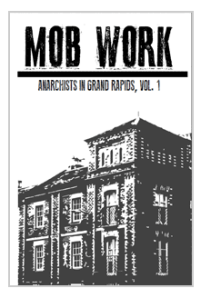 These four zines not only are well written and well researched, they make it clear that there has been an anarchist presence in Grand Rapids since the late 19th century.

Volume 1 in the series covers the German anarchists in the 1880s in Grand Rapids and its connection in Chicago to the International Workingpeople’s Association (IWPA), along with the famous Grand Rapids anarchist Voltairine de Cleyre.

Volume 2 covers a number of different topics pertaining to anarchist activity in Grand Rapids in the early 1900s. We look at the Dutch anarchism of Hendrik Meijer who brought the ideas of Dutch anarchist Ferdinand Domela Nieuwenhuis to West Michigan, recount Emma Goldman’s several visits to Grand Rapids, tell the story of the solider-turned-anarchist William Buwalda, and explore the Industrial Workers of the World (IWW) and their activity in Grand Rapids in the 1910s, including their role in the famous Furniture Strike of 1911.

In volume 3 , topics include the story of Charles Bergman, an anarchist from the Grand Rapids area who organized talks in Grand Rapids for Emma Goldman and printed anarchist propaganda, the repression that anarchists and other radicals faced during World War I and the years immediately following the War, the efforts to keep anarchist resistance alive during the 1920s through the 1950s, and the resurgence of anarchy in the 1960s. Where activity in Grand Rapids could not be found, Mob Work fills the gaps by looking at anarchist activity on a national level. In terms of “the sixties” movement, the zine presents generally unexplored history of anti-war and counter-cultural resistance in Grand Rapids, including an examination of Students for a Democratic Society (SDS), local underground newspapers, and the anti-police riots that took place in the late 1960s. 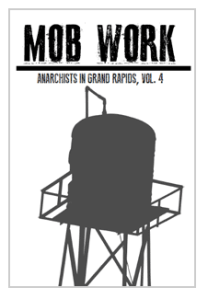 Volume 4 deals with relatively recent anarchist history is the topic of discussion with the 1980s through the 1990s being explored. In Grand Rapids, as was the case nationally, these years continued a resurgence in anarchist activity that started in the 1960s. Volume Four begins with an overview of what was happening on a national level during these years, looking at efforts around publishing, networking, and organizing. This overview provides an important outline of a history that often goes untold. Following this, the zine explores anarchist activity in Grand Rapids. Topics include anarchist visibility in the punk scene, various groups that were around over the years, organizing against police brutality and white supremacy, and participation in national efforts such as the Anarchist Black Cross and Food Not Bombs.