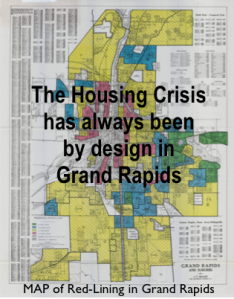 Glen wrote this 3-page document on January 5, 1970, a document that was addressed to Mayor Christian Sonnevedlt. The document has as its title, Urban Renewal Housing. Early on in the document, Glen writes the following about the housing crisis:

Glen is correct in his assessment of the crisis and that it has been an issue for some time. We know that particularly in the city’s 3rd ward, specifically within the African American community, that the housing crisis was substantial. In a 1940 Urban League report, it states:

“In many instances the two-family houses are converted single family structures. Only one-fifth of the structures are in good conditions, one-third of them need either major repairs or are unfit for use. Nineteen families of the 205 (renters) do not have toilet facilities within their own unit; a greater number of families (84) do not have private baths. Over half of them live in cold water flats where they must furnish heat from small stoves, there being no central heating plant.”

That same 1940 Urban League report also states in the concluding remarks, “conditions in the Negro community are no better, if not worse, than at the time of the 1928 report.”

In 1947, the Urban League conducted another report on the State of the Black community in Grand Rapids. The 1947 report reflected very similar dynamics in terms of housing ownership and housing conditions, as the 1940 report. The reports cites the disparities between white and black residents when looking at housing, particularly at the cost of rent. A great deal of the housing disparities were due to structural racism, often in the practice of Red-Lining that plagued the black community for decades.

Another factor that contributed to the housing crisis in Grand Rapids, particularly for black people, was the construction of the highways through the city (196 & 131). In an interview I did with Fr. Dennis Morrow on this topic, he talked about 1,000 homes being destroyed and the devastation it had on families:

We don’t normally call it devastation, because something was built. It was pushed through by the government and certainly you could say that some people have benefitted from it. However, if the devastation from the riots of the 60’s had been nearly as great as the devastation wrought by the freeway construction they would have called the riots an all out war. The amount of dwellings that were destroyed during the riots were infinitesimal compared to those destroyed during the freeway construction.

The highway construction was part of the larger urban renewal efforts amongst city planners, often with the plan of wiping out or further marginalizing black neighborhoods. William Glen identifies this dynamic in the 1970 document, where he says:

The 1967 riot in Grand Rapids had a great deal to do with the exploitative nature of the housing, particularly white landlords who were renting to African Americans. Many of the properties that were burned or had other forms of property damage were targeted because they were white-owned, but also because black neighborhoods were being ignored by the City.

William Glen goes on to say that it is the City’s responsibility to address the housing crisis by investing massive amounts of money and to appoint someone who would coordinate this effort.

Glen concludes that this effort cannot be done in piecemeal fashion and that the longer we wait the worse it will get.

It is just a few weeks shy of 50 years since William Glen wrote this document. Grand Rapids is still facing a serious housing crisis, especially since the “power structure,” as Glen referred to it as, did not heed his words. One could argue that the power structure continues to ignore the thoughts of William Glen to this very day.