Over the past month, we have been posting articles based on archives from the Grand Rapids Public Library of Paul I. Phillips. In January, we posted a piece from a document by Phillips, where he lists all of the black soldiers from Grand Rapids who enlisted in the Civil War.

Two weeks ago, we posted a second article from the Paul I. Phillips archives, something written in the mid-1970s, where Phillips was sharing notes about the economic, political and social conditions of blacks in Grand Rapids.

Today, we want to look at some examples from 1913, where black people were featured in news stories from the Grand Rapids Evening Press. The first article, headlined, Rev. S. Henri Browne Tells Church Class of Conditions of Negroes. The article does share some of Rev. Browne’s thoughts about the condition of blacks in Grand Rapids, like substandard housing, landlords who were demanding high rent for “old ramshackle buildings,” and lack of employment. 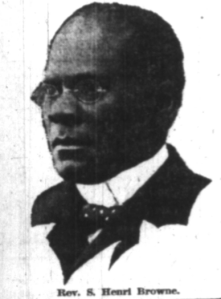 In a second article, also from the Grand Rapids Evening Press, Rev. S. Henri Browne talked about being denied the purchase of shoes from a shoe store owner in downtown Grand Rapids.

“I submit to you it is shameful that in your city, on Monroe Avenue, is a shoe store where Rev. S. H. Browne, a college graduate, who addressed you today so ably, cannot buy a pair of shoes because he is black.”

This comment was from Sherman N. Furr, president of the Newport News, Virginia.

Both of these articles provide a small window into the realities that African Americans faced in Grand Rapids in the early part of the 20th Century. It is always instructive to see how blacks were represented in the local news media and what the news media chose to tell us about blacks in Grand Rapids.

This entry was posted in Civil Rights/Freedom Movement and tagged blacks and discrimination in Grand Rapids, condition of blacks in Grand Rapids, Paul I. Phillips archives. Bookmark the permalink.