Just after the Depression years, the Grand Rapids City Government provided direct relief and created a public works project for those unemployed

The great depression that began in 1929, happened all across the globe. Grand Rapids was not immune to the devastation brought about because of the economic catastrophe.

However, during the depression years, there was one elected official who implemented New Deal-like policies, policies that provided relief to hundreds of families in Grand Rapids.

George Welsh was Mayor in Grand Rapids when the country was just coming out of the “Great Depression. According to Z.Z. Lydens book, The Story of Grand Rapids, Mayor Welsh wanted to do something to address the growing unemployment problem in the city. According to Lydens:

There were ominous moments when masses of men milled in front of City Hall, men who were seeking rescue from their jobless plight and the unmet needs of their families. Communist instigation was suspected, but the need was too obvious to call for instigation beyond need itself. To help the hungry, the unsheltered, and the unclothed, Welsh, supported by the City Commission, created all manner of public works. He adopted the philosophy that a man had a right to save his honor by working for his keep. Welsh instituted a script system of wage payment and set up a municipal food store, scrounging food where he could.

Lydens goes on to say that the city was taking care of 20,000 men, women and children through this New Deal-like program. 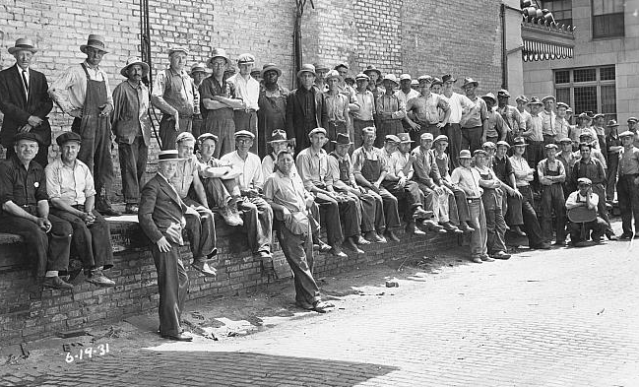 According to the Grand Rapids Historical Commission:

Instead of money each laborer was paid about fifty cents per hour in scrip coupons which could be used at stores set up by the city. Scrip labor was not unique to Grand Rapids, but the extent to which it was used was unprecedented. The projects included snow removal, Grand River bank cleanups and dredging, demolition of old city buildings, cleaning and salvaging of materials from demolished buildings, the building of the Civic Auditorium, painting City Hall, shoe repair, canning foods, and the building of Richmond Park Pool and Bath House.

The photo above shows workers who participated in this script system that Welsh had set up. (Photo care of Grand Rapids Historical Commission)

This example of what the City of Grand Rapids did during the depression is rather instructive. First, it demonstrates that the city can and did use government resources to provide material relief for thousands of families, putting people to work that would ultimately benefit the city as a whole. It also demonstrates that in times of crisis, social charity is not the only form of relief and that municipalities can play a significant role in making sure that those who are the most vulnerable and most marginalized deserve support beyond social services.

Imagine what the City of Grand Rapids could be doing right now, if it implemented a public works project so that families could get their basic needs met. What would the city look like if there was an equal amount of funding utilized for public works projects as is provided as subsidies and tax breaks for developers?

This entry was posted in Anti-Capitalism/Labor and tagged Grand Rapids during the Great Depression, Mayor George Wlesh, public works program. Bookmark the permalink.