( A special thanks to the Grand Rapids Public Library and its support for accessing the source documents used for this article.) 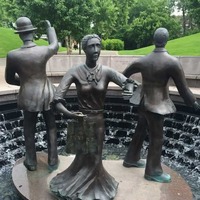 In Part One, we looked at the role of Catholic Bishop Schrembs, whom the furniture workers on strike referred to as, Angel of the Workers.

From April of 1911 through August an estimated 7,000 furniture workers went on strike in Grand Rapids, in what was to be the city’s largest labor dispute to this day. After 19 weeks of walking off the job, most workers voted to go back to their factories, despite not winning their demands. Two people, writing from fundamentally different perspectives, documented what took place during the strike and its outcome.

Viva Flaherty documented the 1911 strike because she believed that the “people of Grand Rapids are awakened and enlightened and they can be trusted with the whole truth.” Flaherty went on to say, in her introduction to the History of the Grand Rapids Furniture Strike:

“A strike is a public matter, and if the people are to know how another is to be avoided they should know all the inside facts of this one, so that they may know whom to distrust and on whose shoulders rests blame for a nineteen weeks strike.”

Flaherty makes it clear in her version of the story that the strike was able to endure as long as it did because of the seven unions that were involved, with membership of over 4,000 workers in thirty-five shops in Grand Rapids. She also made it clear in the opening observations of her historical account that the Christian Reformed Church would not grant their members the right to be part of the union, since it was not “founded on divine right.”

On page 8 of the booklet written by Flaherty, she documents the kind of wages earned by those in the furniture industry, stating that of the eight thousand furniture workers employed in Grand Rapids, most made less than $2 a day. Flaherty also mentions that as early as 1909, after furniture workers found out that the price of what they produced had increased by 10%, they demanded that their wages increase. Some of the workers who had made such demands in 1909 were fired shortly thereafter as being agitators.

As we mentioned in Part One, a commission was established to investigate the grievances of the workers, which included a final report. However, according to Flaherty, the Brotherhood of Carpenters and Joiners had designated the commission as, “the hired servant of that powerful union, the Furniture Manufacturers Employers’ Association.”

Such suspicions were affirmed by the furniture industry’s claims that they needed to honor any of the demands from the striking workers around wages, hours, piece work, etc. Flaherty notes that the furniture barons, “repudiated any social responsibility to regulate wages to suit the cost of living.”

On page 17, Flaherty affirms the workers admiration of Bishop Schrembs when she writes: 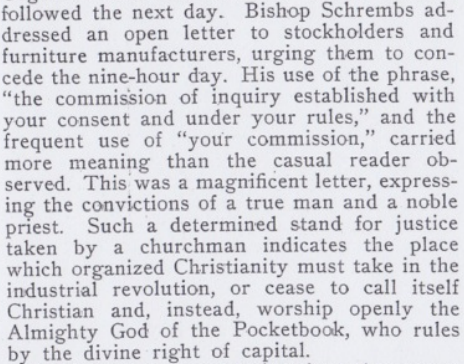 Such commentary not only reflects that Schrembs was practicing the social gospel, but it also reflects the sophistication of Flaherty and her keen theological observations. What a powerful indictment she makes of the church that endorsed the furniture barons, by stating that they worship the Almighty God of the Pocketbook.

Flaherty then goes on to talk more about the specifics of the strike, beginning on page 18, where she discusses the “riot” on May 15. The “riot” Flaherty was speaking of is when workers and their wives confronted strikebreakers & scabs who were brought in to continue with production after the walkout of 7,000 furniture workers.

It is worth noting here that during the confrontation against the scab workers, many of the women in the crowd, who had been hiding rocks and bricks under their dresses began to throw them at the scab workers and cops who attempted to escort them into the factories. Such disgust at the attempt to break the strike by the furniture barons is captured in the statue dedicated to the 1911 furniture workers strike. At the feet of the woman depicted in the statue, you can see rocks underneath her dress.

The City of Grand Rapids, for its part, not only called for arbitration during the strike, but adopted this resolution on July 24, 1911:

Towards the end of the booklet, Flaherty provides more forceful observations about the furniture industry and reflects a high level of class consciousness that workers had developed in the early part of the 20th century. Flaherty states:

“Capital knows that when the people realize that capital is organized in this country today for the conscious and deliberate purpose of crushing labor in its efforts to become free, the people will make common cause with labor and send the divine right of capital to join the divine right of kings. Industrial freedom is a state which the world as yet has not experienced.”

Flaherty then follows up with a clear indictment against the captains of industry, particularly the National Association of Manufacturers and the Furniture Manufacturers Employers’ Association. These entities were producing their own propaganda that blamed workers for being “class conscious” and for “stirring up trouble.”

Viva Flaherty’s documentation of the 1911 Grand Rapids Furniture Workers strike is in stark contrast to the observations of R. W. Irwin. Whereas, Flaherty’s booklet was distributed in public, Irwin’s booklet was a transcription of a talk he gave to the National Association of Furniture Manufacturers in December of 1911.

Irwin begins his observations by making the claim that, “nor do I believe there is any other place in this country where the rank and file of the laboring men are better housed and better cared for than in Grand Rapids.”

Irwin continues with his arrogant tone by talking about the businessmen in Grand Rapids as “having unusual strength and ability.” He mentions several of the furniture barons on page 5 and states, “that Grand Rapids owes its supremacy in the furniture world” to these men.

To his credit, Irwin does acknowledge the union organizing efforts in Grand Rapids, particularly those of the Brotherhood of Carpenters and Joiners. (pages 8 – 9) However, shortly after this acknowledgement, he dismisses the claims made by the unions before and during the strike, by saying the following on page 10:

Near the end of Irwin’s talk to the National Association of Furniture Manufacturers, he grants near sainthood status to his fellow industrialists.

It is critically important that both a worker and a capitalist perspective are preserved on the 1911 Grand Rapids Furniture Workers strike in these documents. They represent the strong class divide that existed in Grand Rapids at the time, a divide which still permeates the city today.